Why is it Said That a Ballpoint Pen is More Difficult to Make Than a Nuclear Bomb?

There is an old Chinese saying that good memory is not as good as bad pen. Although with the development of the information age, mobile phones and computers are commonly used, pens are still necessary for people's daily life. Nowadays, pens are diverse, but among these pens, there are none. A pen dare to compete with a Ballpoint Pen.

Ballpoint pens are very long in the history of pens. The name ballpoint pen first appeared in 1888. An American journalist named John Lauder designed a pen with a roller-ball tip, but he did not use it. This kind of pen was made into commercial use, until 1895, this kind of pen began to appear on the market.

In 1943, Biro and his brother Georg produced the first commercial pen Biro ballpoint pen. The British government bought the patent. These ballpoint pens began to be widely used among Air Force crews because traditional ink would overflow. , Don’t worry about ballpoint pens.

Moreover, ballpoint pens are very sturdy and can adapt to the environment of World War II. Ballpoint pens began to be used in the fascist countries and allied countries. In 1945, the United States put ballpoint pens into production. Milton Reynolds improved ballpoint pens. Although they were Plastic Ball Pens, the Renault ballpoint pen was first introduced. Expensive, nearly $10. 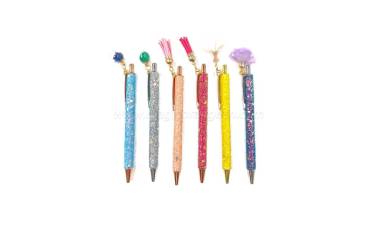 However, Frenchman Marcel Bisch developed a process for manufacturing ballpoint pens, which greatly reduced the cost of ballpoint pens. In the price comparison, the price dropped from 10 US dollars to 10 cents. There are nearly millions of pens every day. Ballpoint pens flow to the market.

When making ballpoint pens, they found that the ink would often leak out from the gap. Although there was only a small amount of waste, it was fatal for Japan. Japan specially produced a short ballpoint pen refill and ballpoint pen with a service life of Half of the original price, but the price has also been sharply reduced by half. This new style of ballpoint pen has begun to sell well in Japan.

Although China has produced ballpoint pens, the steel for the pens has to be imported in large quantities. The importing countries are mainly from Switzerland and Japan. In order to solve the import dependence dilemma, 60 million yuan was invested in research. In 2011, China no longer needed to import , The Metal Ballpoint Pen is also officially made in China.

In summary, there are not only three countries that can make ballpoint pens, but only three are willing to make them. One is Switzerland, one is Japan, and the other is my country. Swiss precision instruments are recognized all over the world, and Japan is vigorously developing. In the industry, my country has improved its import dependence.

Previous: How to Choose a Notebook?
Next: 5 Hidden Safety Hazards of Stationery, the Most Serious Can Cause Cancer? How Do Parents Choose?