Discussing the changes in Children's Toys can better understand the value of toys to children's development, so as to better improve children's toys and better nourish childhood.

The type of children's toys changes with the ages

The close relationship between childhood and toys determines that childhood memories of different ages are branded with different toy memories.

In the childhood memories of Chinese people today, in the 1950s and 1960s, material shortages are in the process of solving food and clothing. There are few toys on the market, and children's toys are mostly homemade. Among them, wooden toys are the most common, such as wooden pistols, spinning tops, tricycles and slingshots, as well as common clay animal toys and sound toys. In addition, rolling hoops, kicking shuttlecock, and bouncing glass balls were also popular among children at that time.

In the 1970s, tin toys became popular, and wooden toys gradually decreased. Tin frogs, tin trains, tin pistols and tin robots were the most representative toys of the time. The 1980s was the most popular era for Transformers, and game consoles began to appear. At that time, there were no mobile phones, no computers, and some were Transformers, Rubik's Cubes, building blocks, foreign paintings, Barbie dolls, electronic pets, and four-wheel drive vehicles that gradually replaced tin toys. The popular Xiaobawang game console has also begun to enter the lives of children.

The 90s of last century can be called the era occupied by cartoon characters and toys. A large number of foreign animations have entered the Chinese people's field of vision, and the children's toy market has been quickly occupied by animation character toys. Special forces, Toy Story, Teenage Mutant Ninja Turtles, Doraemon, etc. became the mainstream toys for children of that era. Over the past decade or so since the 21st century, with the rapid spread of electronic technology, iPad, 3DS, PSP game consoles, remote control toys, smart toys, etc. have become children's favorites. At the same time, foreign animation-related peripheral toy products have also ushered in a heyday. 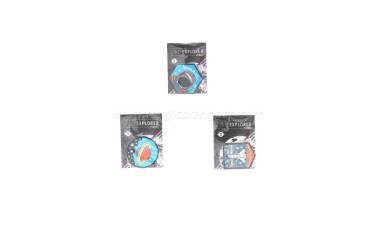 The quality of children's toys changes with technology

From the historical changes of children's toys since the founding of New China, it can be found that modern children's toys have also achieved their own transformation with the development of science and technology.

The first is productization and commercialization. Traditional children's toys are mostly made from natural materials in the surrounding environment and discarded products in life. To a large extent, they are handmade by relying on the toy community formed by adults and children. The mainstream of modern children's toys is mass-produced based on industrialized mold design and mechanized technology. The structure and function of the toys tend to be standardized and unified, and they can be supplied on a large scale in the form of marketized commodities. In the context of fast-paced modern life, direct purchase has become a convenient channel for obtaining toys.

The second is electronic and intelligent. Based on the rapid development and promotion of digital technology, the design and research and development of modern children's toys are increasingly incorporating electronic technology and showing the characteristics of intelligence. Compared with the simplicity, nature and simplicity of traditional toys, the novel charm of modern children's toys presented simultaneously with sound, light, and shadow stimulates and attracts children's vision and hearing. Today, you can see children who are squatting and holding a piece of electronic screen attentively. The intelligence of electronic games reflects the increasingly extensive and profound role of high technology in the development of children's toys.

Next is fashion and westernization. Compared with the inheritance of local culture and national customs in the production of traditional toys, today's children's toys show more respect for cartoon images and Western culture. At the same time, with the popularity and promotion of children's animation works, various cartoon children's toys are constantly being updated and updated. This shows that the market and consumption of modern children's toys follow the fast-food orientation of fashion culture.

Children's toys have shifted in value

In the great progress of modern children's toys, there are also hidden changes in value closely related to the development of children.

First, it emphasizes functional value and neglects emotional value. The popularization of modern commercialized finished toys and Parent-Child Toys has dispelled the connection between parent-child interaction and companionship established by traditional self-made toys. Children's interest and even indulge in exploring electronic images and virtual world functions replaces the need and desire for interpersonal relationships and emotions in reality. At the same time, because there is no need to use natural materials and hands-on production, coupled with the indoorization of video games in space, it blocks the closeness of children to outdoor nature and the countryside, and is indifferent to the homeland where children can only sprout in this closeness. Consciousness and homeland feelings.

Second, focus on intelligence and light on intelligence. The intelligence of modern children's toys is only the intelligence carried by the toy itself, and it does not mean that it can give the user of the toy intelligent enlightenment. On the contrary, the more intelligent the toy, the easier it is to give children a "dumb" use method and experience, and with its digital precision technology and program coding, children can only passively get stuck in the predetermined mode operation . Faced with ready-made, pre-programmed functions, children are mechanical and passive, lacking choice and creativity. It is precisely in the thrill of "passing the game" in the video game that children's minds step by step fall into the trap of high-tech presets.

Third, focus on modern technology and neglect cultural heritage. Traditional handmade toys carry long national culture and historical traditions. However, as modern high-tech toys and electronic games have increasingly become children's new darlings of entertainment, traditional toys and natural games are gradually fading out of the vision of modern childhood life. The introduction and penetration of foreign film and television animations and related toy images not only bring children the novelty and fashion experience of foreign culture, but also cut off children's spiritual growth and the bond with local culture.

Where should modern children's toys go

First, reconstruct the toy community. The mass production of modern toy machines and their supply have eliminated the toy community formed by children, adults and their companions in the traditional society. In kindergartens and family education, it is necessary to build a toy community promoted by children, teachers, parents, and children’s companions in the process of creating play environments and toy materials as the ecological background of interpersonal relationships. Form a toy-centered, and participate in toy making and games together to form emotional interactions between teacher and child relationships, parent-child relationships, and peer relationships, and feel the joy and success of joint planning, discussion, exploration, cooperation and sharing.

Second, establish a toy screening mechanism. In order to fully protect the physical and mental health and development of children, a screening mechanism for the toy market should be established. Generally speaking, choosing toys for young children needs to grasp several aspects. In terms of function, it is necessary to puzzle and support operation and encourage creativity, which can stimulate children to use their brains and hands, encourage creativity and change, satisfy their desire for exploration and performance, and enable them to obtain useful knowledge and activity experience.

In terms of gameplay, it must be playable and fun. In terms of playing methods and skill requirements, it is suitable for children's age characteristics and level, and is full of playfulness. In terms of material, it must be safe and durable. The construction of Toys should be safe and environmentally friendly, and ensure that there are no sharp corners, no peculiar smell, no pollution, and no radiation. It is best to be easy to clean and reusable. In terms of shape, it should be artistic and beautiful. The appearance is vivid and vivid, the colors are bright, and there is artistic taste, which meets the requirements of healthy aesthetics, and gives children a pleasant aesthetic experience.