In addition to traditional building blocks, parent-child themed toys such as role-playing, Butterfly Wings Complete Kit, and four-wheel drive vehicles have gradually become popular in the market. In the toy industry, various activities with the theme of parent-child interaction have become one of the focuses of the industry in recent years, and toy products related to the theme of parent-child have also become a boom in market consumption.

At present, most toy consumers are related to parents born in the 80s or 90s, because young parents pay more attention to promoting the baby's physical and mental development, emotional intelligence training, skill promotion, and game interaction when choosing products. Since there is market demand, the effect is naturally relatively optimistic.

Parent-child toys are not only beneficial to the emotional communication between parents and children, but also promote the healthy development of children's minds. In this process of parent-child interaction, children get toys and feel the company of their parents, while parents see their children’s growth, so parent-child interactive toys are relatively more popular. 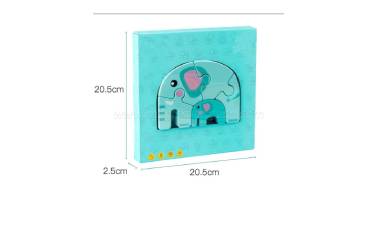 How can parents interact together

For Parent-Child Toys, the ideal state is for children to interact with their parents, but in fact some toys are children playing by themselves or with other children, and parents are less involved. Toy manufacturers are now beginning to guide this kind of parent-child interaction. For example, children make cooking games and use wood to make pizza. The children play on their own in the playground. Then they take the toys to find their parents and ask parents, Is the pizza I made good? Let the children lead their parents to join the game.

Educational and sports toys are most suitable for parent-child interaction

It is understood that toy puzzles are a favorite way for most parents, but many toy products in the market have functions such as parent-child interaction, but the parent-child function is somewhat far-fetched. Parent-Child Toy Suppliers believe that parent-child toys have at least the following functions: strong interaction, with certain skills expansion and potential development, or role-playing, learning cognition, parent-child games, etc., which can cultivate children’s IQ and EQ. It is an excellent parent-child toy.

Previous: Homemade Toys Are Fun
Next: Painting is Better Intellectual Development, Do You Know Why?